As a teenager, he chased down fractions of a second with rifle on his back and skis on his feet. Now he prefers to hunt tranquillity in the snowy landscape of northern Norway, working as a mountain guide based in Narvik and the Alps. Elevenate friend Johan Tollstadius lives for the mountains and dreams of his own ski touring lodge, one that is surrounded by silence. 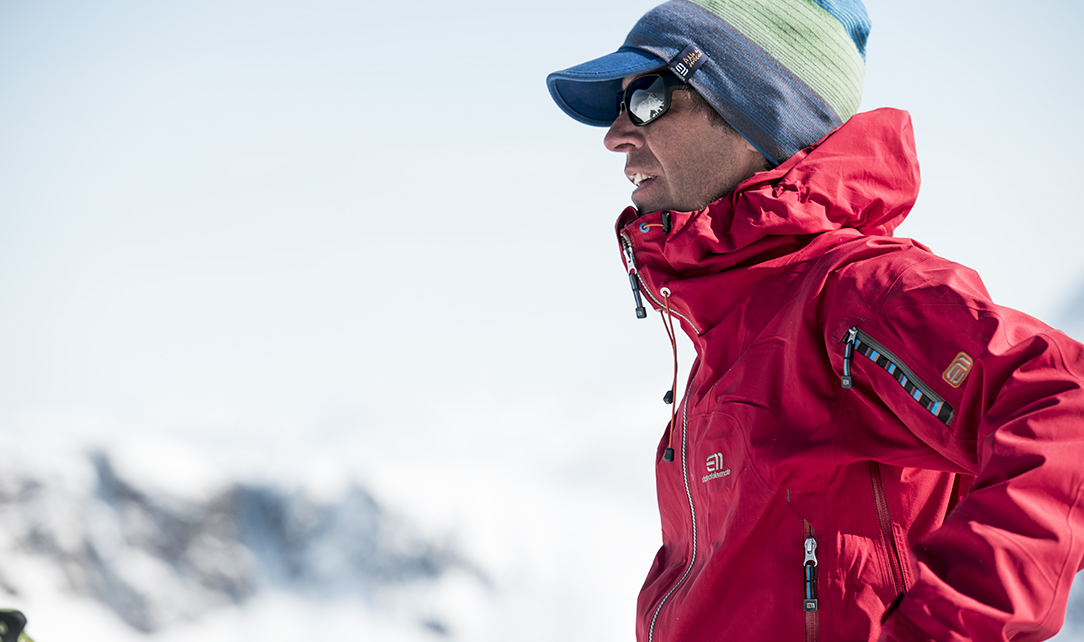 Most people who travel to the mountain hut in Hunddalen in the north of Norway take the train to Katterat, close to the Swedish border, and walk up along the road. Johan Tollstadius thinks this is a waste of time. This hut is one of his favourites, but he would rather start down in Beisfjord, south of Narvik, then walk over Storfjellet, 1,600 metres straight up from the ocean, and enjoy skiing across the glacier and down to the hut.

Almost no one else takes this route, it’s too long. But Johan’s sporting background – he was Junior World Champion in biathlon – means that for him the route it is neither tough nor long.

“Storfjellet is one of the best peaks in the area, I head up there several times a year. My rucksack is a bit heavier because I have to take food with me, but then I eat it at the hut,” he says.

It’s late May 2018 when Elevenate’s Jimmy Odén and photographer Matti Rapila head out from Beisfjord with Johan. It’s warm and patches of snow-free ground are appearing, but the conditions are good higher up and they can lay some beautiful turns down to the hut. 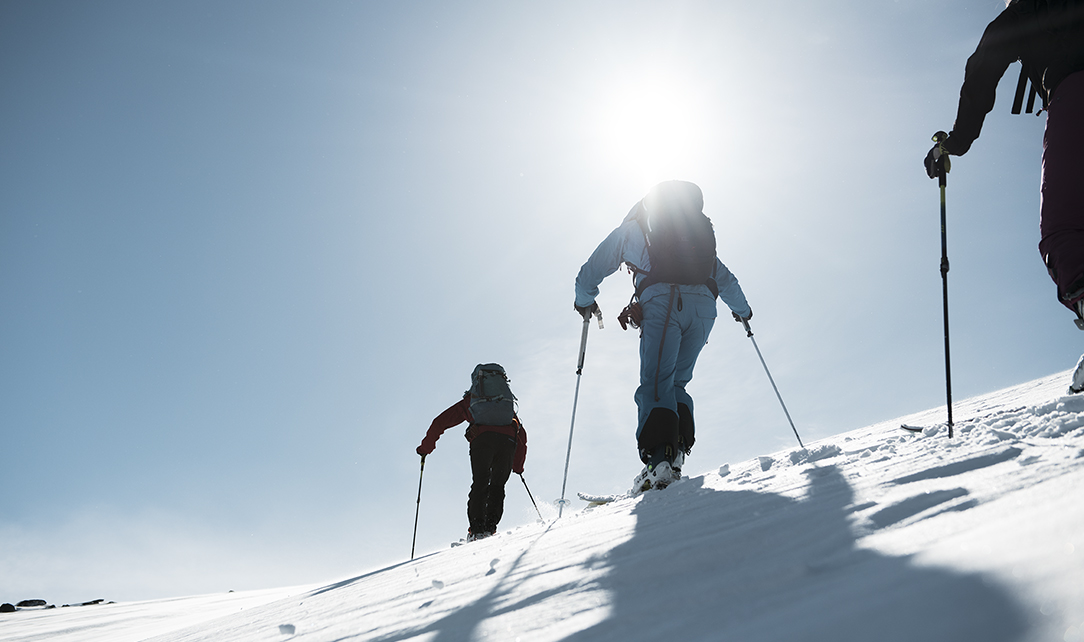 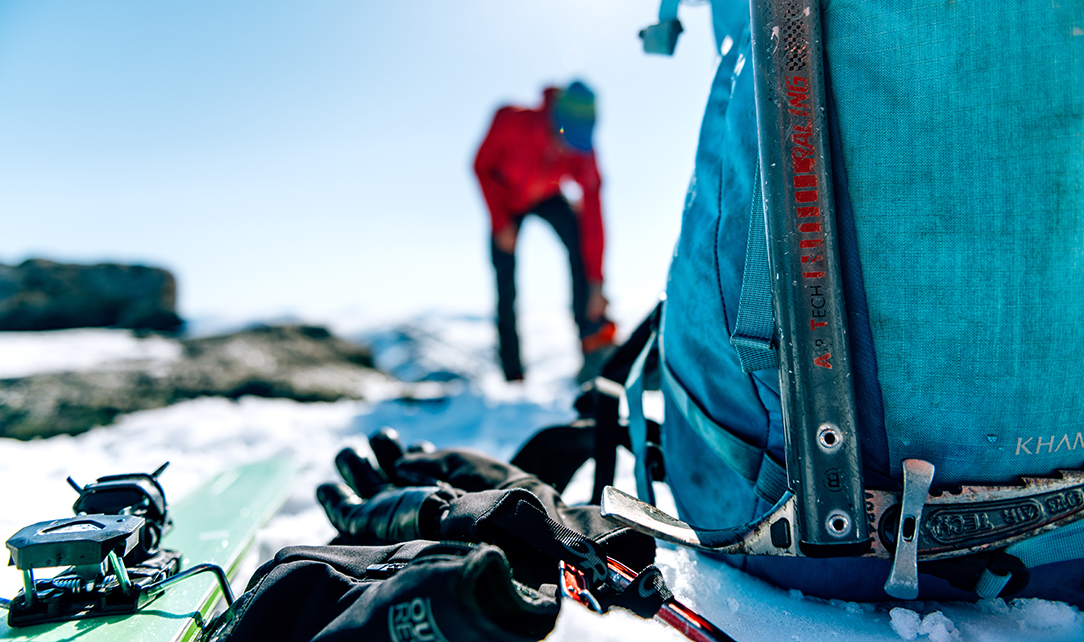 A few months later, Johan is in Chamonix, France. He’s alternating holidaying with his wife, Carro, with training for an ultramarathon and his work as a mountain guide.

“The day before yesterday it was the Matterhorn with a client, tomorrow the Aiguille du Midi with another and later, at the weekend, the Eiger,” he says. “In the summer it’s often the classic climbs. Many clients want to tick specific peaks off their list. It’s understandable, but I’m just as happy to climb a less well-known route where I can be by myself.”

Following in other people’s footsteps is not as good as blazing your own trail. And in the Alps it is common for another team to do the same route on the same day, resulting in an endless procession of alpine enthusiasts. You don’t need to spend much time with Johan to understand that he is most drawn to vast landscapes and solitude – things that he has plenty of at home in northern Norway.

Johan and Carro have lived in Narvik since 2016. The area is famous for its ski-touring possibilities; the mountains here rise straight out of the Atlantic; it’s possible to go from sea level up to 1,800 metres and get some amazing skiing. Johan and Carro bought a house in the middle of town, which they have renovated and converted to three separate apartments. Johan is handy with tools and built the storeroom for his equipment – calling it an extensive collection would be an understatement. A walk-in closet for a mountain enthusiast? Johan laughs.

“I’m happy to avoid bringing my gear into the house. And while I’m waiting for the wax to cool I can do a few pull-ups with my ice axe,” he says, and behind the jest there’s the suggestion that this is exactly what he does. 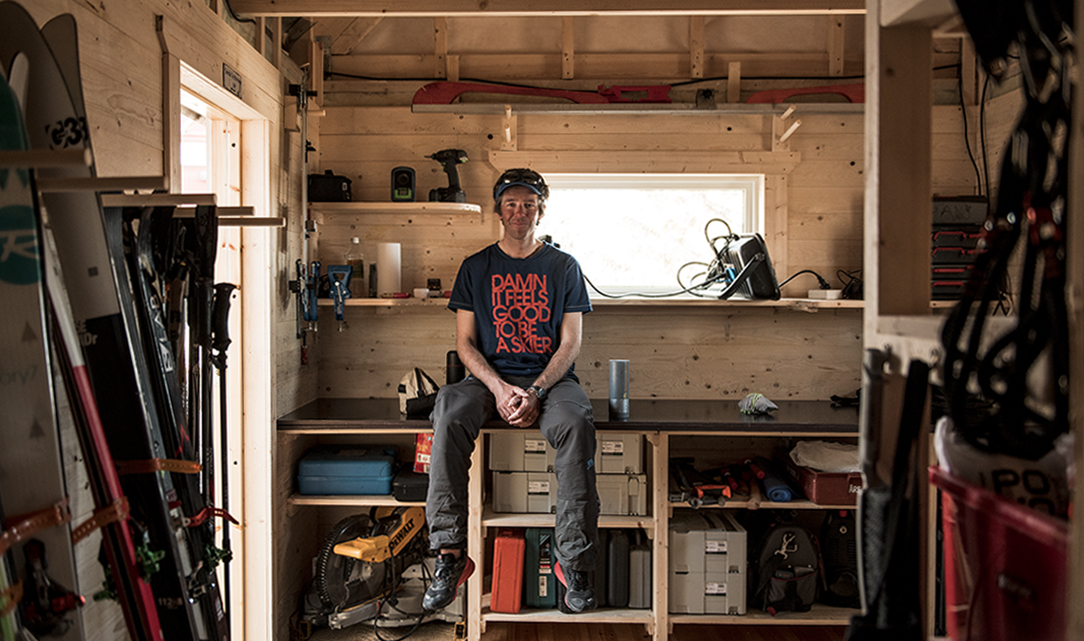 The climbing gym is five minutes from home, the ski lift only two.

“That was what settled it, being so close to everything. And no lift queues! I discovered northern Norway on my first job as a mountain guide. That was in Lyngen and it was so incredibly beautiful, with the fjords, the green water and all the snowy mountains.

“The skiing is bigger in the Alps, but there’s something fascinating here that means you feel closer to nature.”

He says that Stetind, Norway’s “national mountain”, is just an hour from Narvik, with magical climbing on granite walls up to 1,200 metres high.

Skiing and climbing. Johan’s life has centred on these for the last 20 years, after finishing school and his first few seasonal jobs in the Swedish mountains. It was before one of these, on the car journey to work as a ski patroller in Björkliden, that he realised there was only one way forward. If he was going to be outdoors and live in the mountains, there was only one profession for him – mountain guide.

“I like everything about being outside. Wellbeing, great views and spending time with guests or friends. It makes no difference whether my skis are on my rucksack or on my feet, whether things are uphill or downhill.”

Johan qualified as a guide in 2011 and, of all Swedish mountain guides, he is definitely the fittest. More than one colleague has been tricked by his modest personality, only to be left seriously in his wake as he sails away, skate-skiing smoothly across the mountains. But Johan doesn’t boast. He simply loves the movement, the physical exhaustion.

“When I retired from biathlon, I said that I’d never again train until I get tired. But that’s changed, I’m too restless to sit still.”

He explains that now he trains to be strong enough to do a route twice on the same day, in case something happens so he has to. He once logged every training session, but now feels there’s too much focus on GPS watches and training apps. Between the lines, you understand that he thinks something of the experience gets lost with too much concentration on technology. 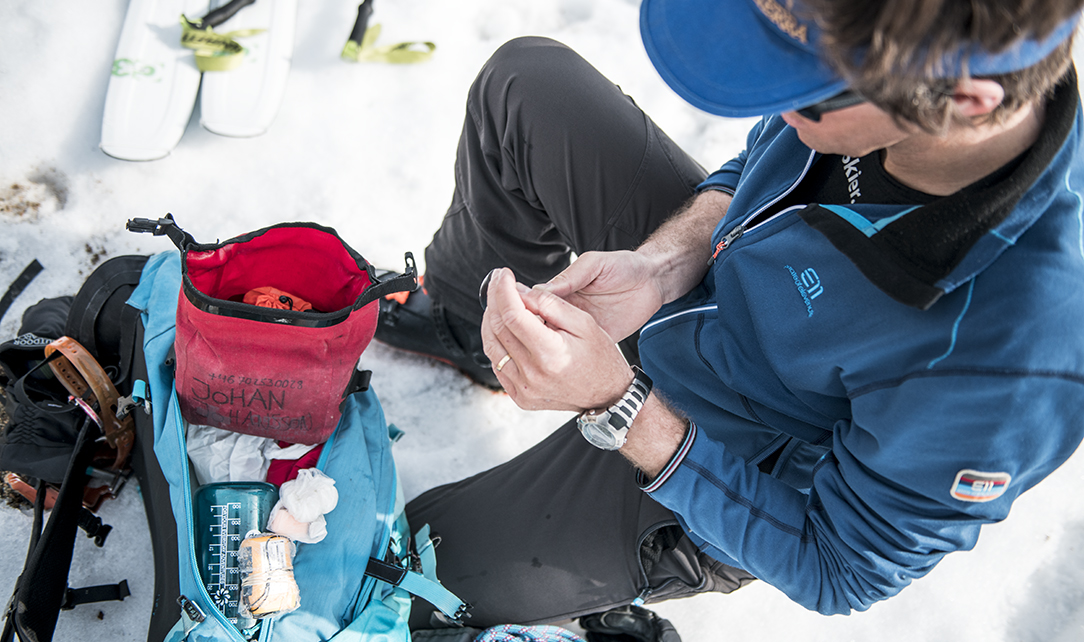 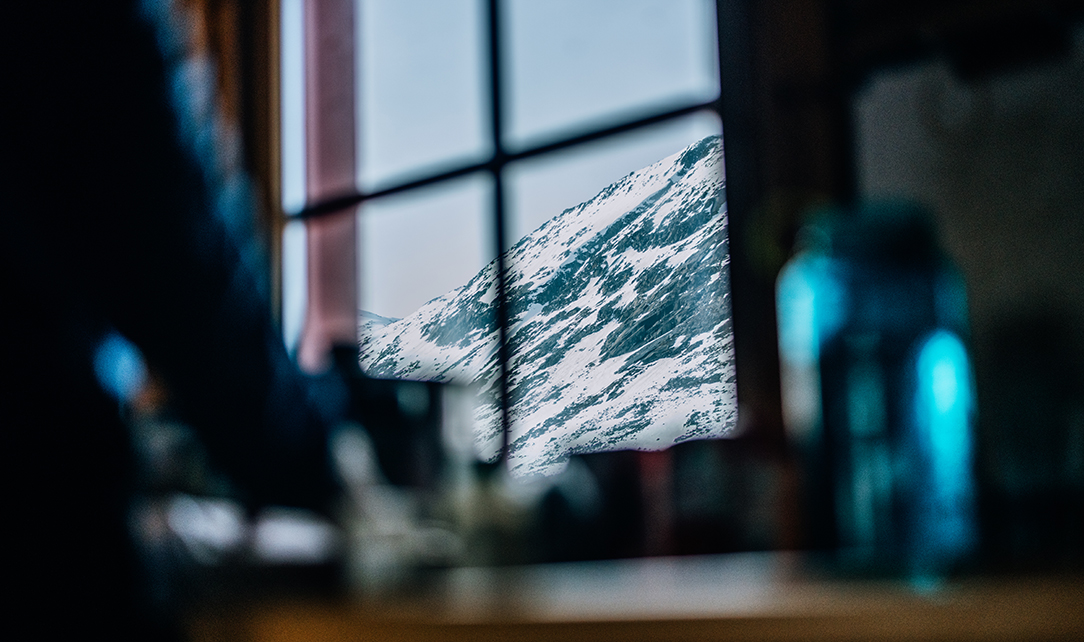 There were quite a few people in the hut in Hunddalen, on that outing in May. It was a little crowded and noisy, as things are when many people have to share a small space. Johan, Jimmy and Matti fix their food, dry their equipment and get comfortable in the jumble of gear and people.

Johan dreams of establishing his own lodge, one with an entirely different feel. A skiing and climbing lodge by the sea, isolated from everything else. He has carefully thought everything out, along with a friend who is a professional log house builder, with whom Johan works for a few weeks every year.

“We know exactly how it’ll be built, in timber, simple but sturdy. When you walk out onto the veranda of your cabin, you shouldn’t see the other cabins, you should feel that you’re entirely alone. And it should be absolutely quiet, you shouldn’t even hear cars in the distance.”

You sense that, at some point, this hunt for solitude will assume a definite physical form – perhaps soon, perhaps in a little longer.

“I’m just looking for the perfect place, that’s the trickiest thing,” he says. 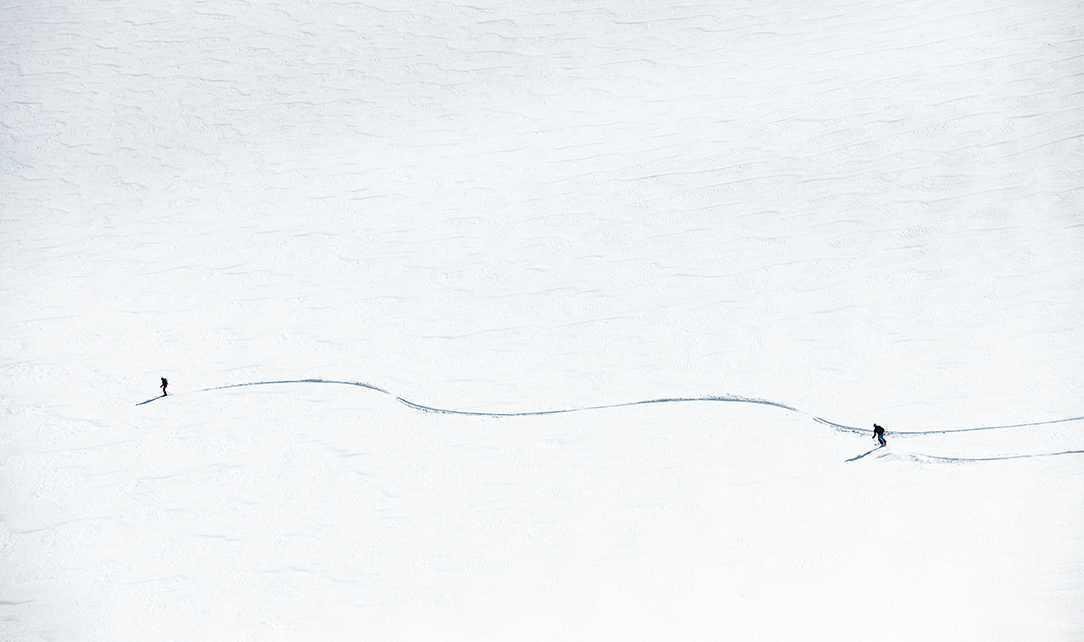 Still, Johan has been perfectly placed for his cooperation with Elevenate. He’s been one of our friends ever since we started.

“I wear Elevenate pretty much every day, ever since the first collection in 2010. Both when I’m working or when I’m out on my own. The fit is excellent, the functionality is great and I like the style. And they’re well-made and durable – I know that because I’m out in them so much.” 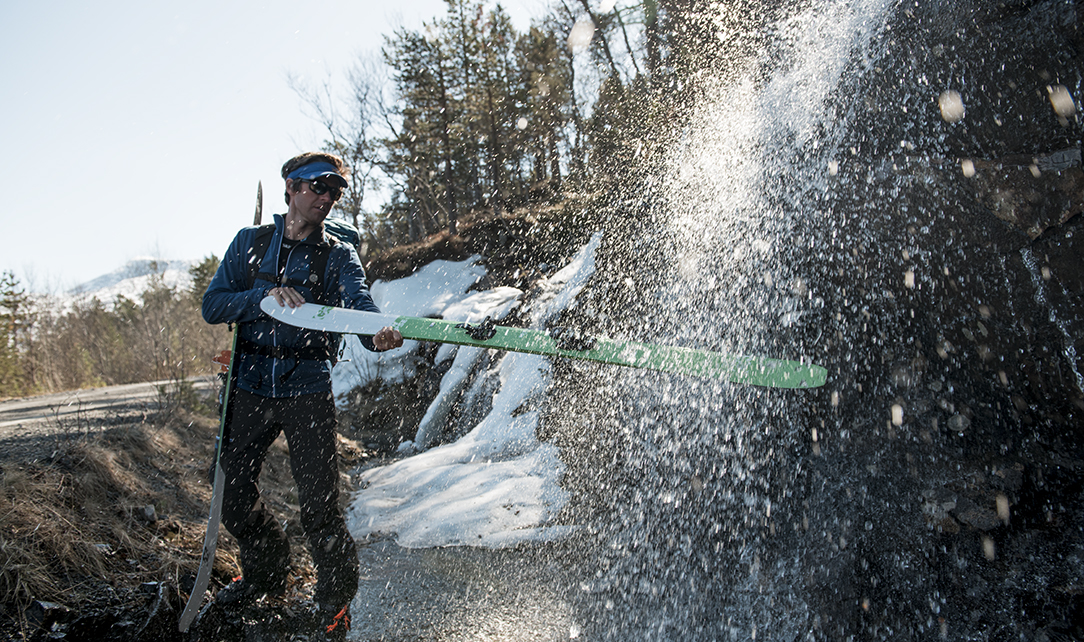 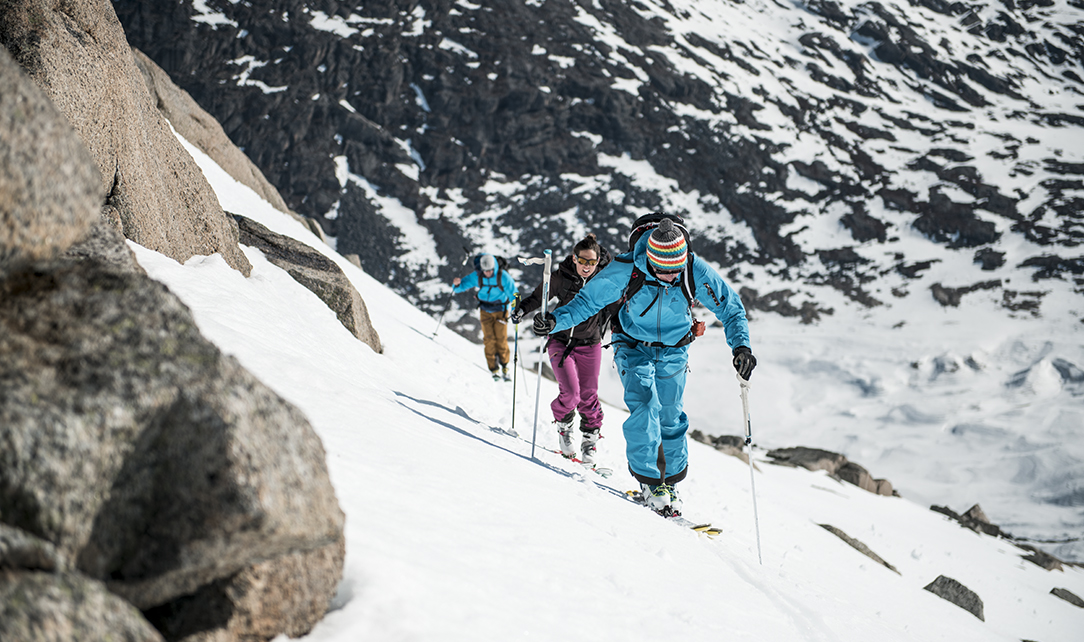